The Influence of Black Leaders on the Marketing Industry The marketing industry has been shaped and influenced by Black leaders. While marketing was previously made up of 88% white marketers, the industry continues to shift. In fact, by 2044, the Census Bureau predicts that groups seen as minorities will collectively reach majority status. Five years ago, the Harvard Business Review also reported that diverse businesses are 70% more likely to capture new markets. Creating a diverse team and listening to team members’ voices with different backgrounds provides your business with more perspective and unique ideas.

In honor of Black History Month, we want to highlight some Black leaders who have shifted the marketing paradigm, helped give minorities a voice and elevated the industry. Caroline Jones became the first Black woman to earn a position as a copywriter at one of the nation’s leading advertising firms, J. Walter Thompson, in the early 1960s. She started as a secretary before becoming a copywriter, and during her career, she became an advertising executive. She created innovative campaigns that challenged her peers’ thoughts that her advertising should only appeal to Black viewers.

She had an extensive record of success with her clients, including American Express, the National Urban League, KFC, and more. Her work helped change how all Americans thought about popular brands. For example, her campaign for Campbell’s Soup that focused on people’s emotions was so popular among Black consumers that the firm adapted it for national campaigns. Her concept is still seen in campaigns today.

After leaving J. Walter Thompson, she joined Zebra Associates, one of the nation’s first Black-owned advertising agencies. She also founded a series of ad firms herself, including Mingo-Jones and Caroline Jones Advertising. Thomas Burrell grew up on the South Side of Chicago and began his career while enrolled at Roosevelt University. During his senior year, he secured a position as a copywriter with the Chicago division of Wade Advertising before moving to Foote Cone & Belding, where he served as Copy Supervisor.

In 1971, he founded Burrell Communications Group and began working with clients such as McDonald’s and Coca-Cola, still the agency’s clients today. As a result, Burrell Communications became the nation’s largest Black-owned marketing firm. Current clients also include Polaroid and the American Association of Retired Persons.

Burrell has become a leader in the advertising world, and in 1986, he was the recipient of the Albert Lasker Award for Lifetime Achievement in Advertising. In addition, in 1990, he received the Missouri Honor Medal for Distinguished Service in Journalism. He also served as the Chairman of the Chicago Council of the American Association of Advertising and the National Board of Directors.

In 2013, following the acquittal of George Zimmerman, Alicia Garza took to social media to express her disappointment in a series of posts entitled “A Love Letter to Black People.” The final post in the series read, “black people. I love you. I love us. Our lives matter.” Patrisse Cullors, her close friend and an anti-police violence organizer, responded to the post with #BlackLivesMatter. This response would later become known as the birth of the Black Lives Matter movement. The hashtag gained popularity, and by the second half of 2013, it appeared on Twitter 5,106 times and has only continued to grow since then. Prior to starting this movement, Garza was working with the National Domestic Workers Alliance, creating a program focused on Black domestic workers.

In 2015, she led the Freedom Ride to Ferguson that helped launch the movement’s chapters not only across the country but around the world. And in 2020, she published her first book, The Purpose of Power, which tells her story and aims to inspire and guide others on building movements to address challenges. One of the pioneering Black leaders in the advertising industry, Georg Olden is an AIGA medal-winning graphic designer. He worked with William Golden, the art director for CBS, from 1945 to 1960 and supervised the identities of programs such as I Love Lucy and Lassie. He also helped produce the vote-tallying scoreboard for the first televised presidential election returns. In addition, he designed the first statuette for the 1962 Clio Awards, one of the most prestigious honors in the industry.

In a posthumously published edition of Who’s Who, Olden is quoted saying, “As the first black American to achieve an executive position with a major corporation, my goal was the same as that of Jackie Robinson in baseball: to achieve maximum respect and recognition by my peers, the industry and the public, thereby hopefully expanding acceptance of, and opportunities for future black Americans in business.”

Olden served as a champion for Black graphic designers throughout his life, including Michele Y. Washington, Lowell Thompson, and Frank Briggs, who all cite him as an inspiration. 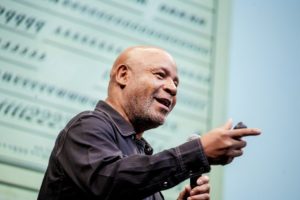 Emory Douglas became active in the Black arts movement at City College by offering his design skills for the inaugural issue of the Black Panther. His signature bold lines formed the faces of armed and defiant people who refused oppression. His artwork played no small part in propagating its combative criticisms of the U.S. government and other institutions or persons viewed as perpetrators of racism, police brutality, poverty, and global imperialism.

From 1967 to 1980, Douglas oversaw the art direction and production of the publication, which became the party’s official newspaper. He depicted Black people as revolutionary fighters instead of victims. His illustrations of pigs in place of police and politicians made him a hero to his community and a subject of an investigation by the government.

Douglas is retired but continues to lend his talent to social and political issues, including Black-on-Black crime and the prison-industrial complex. 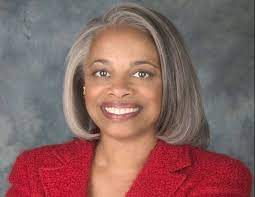 Ann Fudge is highly regarded as one of the most influential and youngest decision-making women in American business. New York Times reporter Judith Dobrzynski wrote that Ann “had to crash through not merely the glass ceiling that stymies white women but an all-but-insurmountable ‘concrete wall’ that researchers say blocks blacks and other minorities from companies’ upper echelons.”

During her career, Fudge rose to the presidency of the $5 billion Beverages, Desserts, and Post Division of Kraft, and that was before she even turned 50. Born in 1951 in D.C., she stated that the assassination of Martin Luther King, Jr. in 1968 helped her gain focus. “I wanted to do something that black people hadn’t done before. When I hit roadblocks, that was what kept me going.”

After getting a bachelor’s degree in retail management from Simmons College and an MBA at Harvard Business School, she was hired by the Minneapolis, Minnesota-based General Mills as a marketing assistant. She soon moved up the ranks, becoming an assistant product manager, product manager, and director of marketing. She introduced Honey Nut Cheerios to the market during her tenure and changed American breakfast.

Fudge moved to Kraft and found skill in repositioning older brands in a newer market. She is known for the slogan “Why Fry?” when reintroducing Shake ‘N Bake. As a result, the company saw double-digit growth. Her goal was to be remembered as a person who made a difference in how people view themselves, and she exceeded that throughout her career. Moss Kendrix designed countless PR and advertising campaigns that promoted increased visibility of Black people for news organizations, entertainers, and corporate clients that included the Ford Motor Company and Coca-Cola. In addition, he dedicated his time to educating his corporate clients about the buying power and influence of the Black consumer. He helped make Americans realize the group was more complex than how they had been described in the past.

He became the director of public relations for the Republic of Liberia’s Centennial Celebration in 1944, after being drafted in 1941 and serving in the U.S. Army. In 1944, he founded his firm, the Moss Kendrix Organization, with the company motto “What the Public Thinks Counts!” The organization continued operating until the ‘70s, and while it is no longer running, its legacy remains.

Looking Toward the Future

These leaders as well as countless others have significantly impacted the marketing industry. Today and every day is an opportunity to celebrate and build upon their legacy. If you work in the marketing field and identify as a Black, you can also join the Black Marketers Association of America (BMAA) to connect to other Black marketers across the country.